Toluna has now rebranded as Toluna influencers to offer the best possible services to the survey takers and the advertisers. Unlike most of the survey sites which just pay for taking online surveys, Toluna influencers try to update the trend by building a reliable online community which includes internet users like you and me. By this way, they could shape the world even better by collecting opinion directly via survey and learning the natural intention via community board. Feel free to read the complete Toluna Review which includes their quick surveys, rewards, affiliate program, and other essentials features that helps you to earn money taking surveys on Toluna.

Toluna is owned by ITWP, Toluna Group. Toluna works with thousands of brands who are in need of insights from millions of consumers around the world. And at the same time, Toluna holds millions of people in its community who are ready to pour their opinion and earn cash rewards and gift cards.

Toluna worldwide refers that they work across various countries in the world.

They have set up their bases in over six continents out of seven. This makes the Toluna Brand one of the largest market research company in the world trusted by brands like BBC, Fox, Sony, Amazon, CNN, Discovery, Accenture, etc.

Toluna connects businesses and consumers in real time using their cutting-edge technology, expertise, and the community.

The members of Toluna can find surveys in hundreds of categories. To mention a few Airline, finance, electronics & appliances, smartphone, internet products & services, food & travel, Information Technology, insurance, Automotive, Health & Wellness, and Engineering are some of the most frequently used categories.

Once you sign up on Toluna, feel free to complete your profile. The profile will help you to register your preferences and frequency. This ensures you can control the type of survey and number of Toluna survey invitations sent to your mailbox.

According to Toluna, it will take from 15 – 20 minutes to complete a paid survey. While I tried to take Toluna surveys, I found it little hard to complete their surveys since most of them are very long and hard compared to the surveys of other survey panels.

One thing positive thing I found in Toluna is that my screen out frequency was a bit less compared to other survey sites. I used to update my profile & preferences often so it might be a sign that Toluna sends the survey invitations relevant to my interest and profile.

Beside regular survey invitations, Toluna never failed to insert trap questions to get rid of spammers and people who try to create fake completions. So, beware of traps where you can escape only by answering their survey truly and slowly. 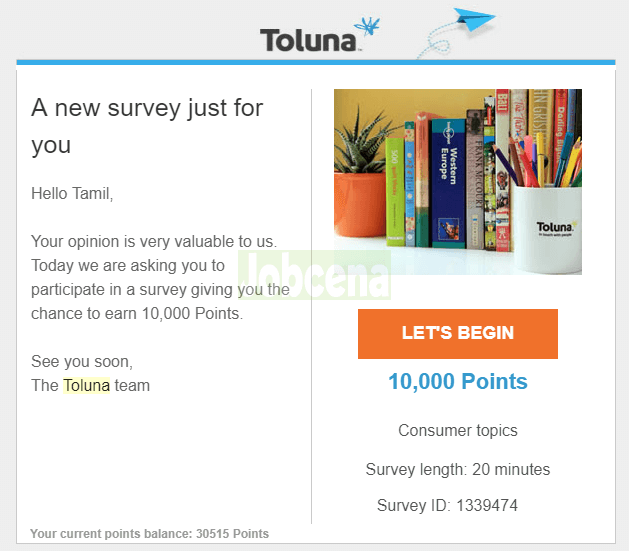 Toluna credit points for completing the surveys that can be redeemed for cash or gift rewards. Survey taker will be notified regarding the ETA, survey topic and the survey rewards before taking the survey. You may find an example of Toluna survey invitation from the image given above.

Toluna usually pays $0.50 to $5 per survey, while the average pay remains somewhere between a dollar or two.

On the whole, as per my Toluna review, it’s a decent survey site to earn money by taking paid surveys but not the best.

Other ways to earn money on Toluna:

While the paid surveys play a significant part in the members’ earnings, there are few other ways you may earn money on Toluna.

Toluna dispenses a small number of points whenever you update your profile like Swagbucks.

Make use of the mini-polls to cast your vote for points. Love mini-polls? You may also like Micro jobs.

Mystery shopping jobs are available in the selected region like the USA.

The Toluna referral program can be used to earn money by referring friends. Advanced users can try their reliable affiliate programs. 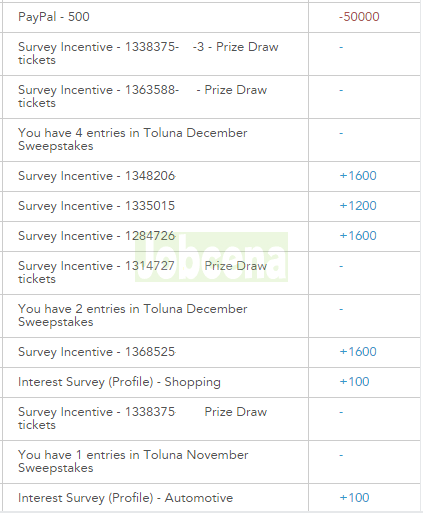 Toluna reward store is the place where we can redeem points for gift cards or cash.

The rewards available in the reward store will vary in different countries. The cash rewards can be redeemed for PayPal cash in the PayPal supported countries.

In the case of gift cards, you must check the reward store on your account in order to find the available gift cards in your geolocation.

Toluna influencers need a minimum of 50000 points required to redeem for rewards. The mobile surveys are very well optimized by Toluna in order to take surveys using the mobile phone without any hardships.

Toluna mobile app acts as the best virtual assistant for the Toluna influencers.

Pros and Cons of Toluna Surveys:

Toluna influencers can be placed one of the top survey panels in the world. While Toluna has major positivity and negativity, they should work on improving their service to the people who are looking to make money.